ORM stands for object/relational mapping. ORM is the automated persistence of objects in a Java application to the tables in a relational database.

3. What does ORM consists of ?

An ORM solution consists of the following four pieces:

The ORM levels are:

The main advantage of ORM like hibernate is that it shields developers from messy SQL. Apart from this, ORM provides following benefits: 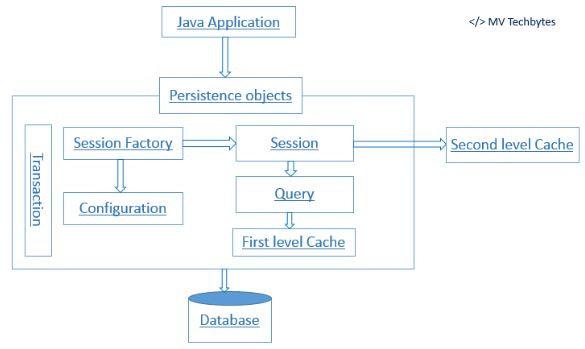 8. What are the most common methods of Hibernate configuration?

10. What are the Core interfaces are of Hibernate framework?

The five core interfaces are used in just about every Hibernate application. Using these interfaces, you can store and retrieve persistent objects and control transactions.

11. What role does the Session interface play in Hibernate?

The Session interface is the primary interface used by Hibernate applications. It is a single-threaded, short-lived object representing a conversation between the application and the persistent store. It allows you to create query objects to retrieve persistent objects.

Wraps a JDBC connection, Factory for Transaction. Holds a mandatory (first-level) cache of persistent objects, used when navigating the object graph or looking up objects by identifier.

12. What role does the SessionFactory interface play in Hibernate?

13. What is the general flow of Hibernate communication with RDBMS?

The general flow of Hibernate communication with RDBMS is :

14. Difference between @Entity and @Table?

@Entity(name="order") : Its a logical construct and the name will be used to name the Entity.

@Table(name="ORDER") : Its a physical construct and the name will be used to name a table in DB

cascade – enable operations to cascade to child entities when operation is performed on root entity in case of a relational mapped entities(OnetoOne, ManytoOne etc)

“mappedBy” attribute of mapping annotations(like @OneToOne, @OneToMany, @ManyToMany) enables bi-directional relationship. This attribute allows you to refer the associated entities from both sides. If “A” Table has association with “B” Table then you can get A from B and B from A. This also tells that entity is on this side inverse and the owner is on the other side.

@JoinColumn annotation can be used along with @OneToOne, @OneToMany, @ManyToMany etc, to indicate that this entity is the owner of the relationship (that is: the corresponding table has a column with a foreign key to the referenced table)

18. What is the difference between and merge and update ?

19. What is Hibernate Query Language (HQL)?

Hibernate offers a query language that embodies a very powerful and flexible mechanism to query, store, update, and retrieve objects from a database. This language, the Hibernate query Language (HQL), is an object-oriented extension to SQL.

20. What are Named Queries?

21. What are Native Queries?

Native query refers to actual sql queries (referring to actual database objects(not entity objects)). These queries are the SQL statements which are directly executed in database using a database client.

Criteria is a simplified API for retrieving entities by composing Criterion objects. This is a very convenient approach for functionality like “search” screens where there is a variable number of conditions to be placed upon the result set.
Example:

Difference between Projections and Restrictions

Projections are used to define which part of an entity you want criteria query to retrieve.

Criteria above when executed will fetch only the name column from the Employee table.

Restrictions, on the other hand, used to define what subset of the data(properties) you want your criteria query to fetch. Restrictions fill the FROM and WHERE part in the query.

org.springframework.orm.hibernate.HibernateTemplate is a helper class which provides different methods for querying/retrieving data from the database. It also converts checked HibernateExceptions into unchecked DataAccessExceptions.

24. What are the benefits does HibernateTemplate provide?

The benefits of HibernateTemplate are :

25. How do you switch between relational databases without code changes?

Using Hibernate SQL Dialects , we can switch databases. Hibernate will generate appropriate hql queries based on the dialect defined.

26. How can we see the Hibernate generated SQL statements on console

27. What are derived properties?

The properties that are not mapped to a column, but calculated at runtime by evaluation of an expression are called derived properties. The expression can be defined using the formula attribute of the element.

28. What is Component mapping in Hibernate?

29. What is the difference between sorted and ordered collection in hibernate?

31. What is the advantage of Hibernate over jdbc?

32. What are the Collection types in Hibernate ?

33. What are the ways to express joins in HQL?

An ordinary join in the FROM clause

A fetch join in the FROM clause.

A theta-style join in the WHERE clause.

Essentially “inverse” indicates which end of a relationship should be ignored, so when persisting a parent who has a collection of children, should you ask the parent for its list of children, or ask the children who the parents are?

35. What is Hibernate proxy?

The proxy attribute enables lazy initialization of persistent instances of the class. Hibernate will initially return CGLIB proxies which implement the named interface. The actual persistent object will be loaded when a method of the proxy is invoked. Example: session.load() method returns a proxy object.

36. How can Hibernate be configured to access an instance variable directly and not through a setter method ?

By mapping the property with access=”field” in Hibernate metadata. This forces hibernate to bypass the setter method and access the instance variable directly while initializing a newly loaded object.

37. How can a whole class be mapped as immutable?

Mark the class as mutable=”false” (Default is true),. This specifies that instances of the class are (not) mutable. Immutable classes, may not be updated or deleted by the application.

38. What is the use of dynamic-insert and dynamic-update attributes in a class mapping?

39. What do you mean by fetching strategy ?

A  fetching strategy is the strategy Hibernate will use for retrieving associated objects if the application needs to navigate the association. Fetch strategies may be declared in the O/R mapping metadata, or over-ridden by a particular HQL or Criteria query.

40. What is automatic dirty checking?

Automatic dirty checking is a feature that saves us the effort of explicitly asking Hibernate to update the database when we modify the state of an object inside a transaction.

Hibernate uses a sophisticated algorithm to determine an efficient ordering that avoids database foreign key constraint violations but is still sufficiently predictable to the user. This feature is called transactional write-behind.

42. What are Callback interfaces?

Callback interfaces allow the application to receive a notification when something interesting happens to an object—for example, when an object is loaded, saved, or deleted. Hibernate applications don’t need to implement these callbacks, but they’re useful for implementing certain kinds of generic functionality.

43. What are the types of Hibernate instance states ?

44. What are the differences between EJB 3.0 & Hibernate

45.What are the types of inheritance models in Hibernate?

There are three types of inheritance models in Hibernate:

Tables are created as per persistent classes but they are treated using primary and foreign key. So there will not be any duplicate column in the relation. We need to specify @Inheritance(strategy=InheritanceType.JOINED) in the parent class and @PrimaryKeyJoinColumn annotation in the subclasses.

46. What is purpose of session.flush() method?

If  session.flush() is called, statements are execute in database but not committed.

If flush() method on session object is not called and if we call commit method, internally it executes statements on the database and then commit.

In order to commit, we use commit() on Transaction object.

Clear (): This method call inside the transaction then all objects which are currently associate with particular session will be disconnected / clean or no longer associated with that Session. This means all objects in the persistent state goes to detached state.

Close() : An open session can be called using session.close() method, it will end the session and releases the JDBC Connection and clean up.

Second level cache can be implemented by following poviders

Each of the above provides different cache usage functionality. There are four ways to use second level cache.

@Cacheable,  @Cache(usage=CacheConcurrencyStrategy.READ_ONLY)  are used on top of Entity classes and below properties needs to be added to the application

49. What is optimistic locking and how it is implemented?

In long running transaction scenarios, optimistic locking becomes a necessity to ensure there is no performance hit. Without optimistic locking, tables could be locked for long duration avoiding concurrent access.

Two approaches to optimistic locking are timestamp and version number.

This site uses Akismet to reduce spam. Learn how your comment data is processed.

This is Mallikarjun Gunda, I am working as a software professional. Blogging is my Passion. This blog contains the posts on Java related technologies and programming languages. I am happy to share my knowledge through the blogs.

I am a Software Developer having over 9+ years of experience in IT with a strong background in Java/J2EE.
LinkedIn:
https://www.linkedin.com/in/venkatasainedunooru/